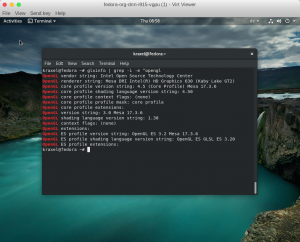 It took more than a year from the first working patches to the upstream merge. But now it's finally done. The linux kernel 4.16 (released on easter weekend) has the kernel-side code needed. The qemu code has been merged too (for gtk and spice user interfaces) and will be in the upcoming 2.12 release which is in code freeze right now. The 2.12 release candidates already have the code, so you can grab one if you don't want wait for the final release to play with this.

The vgpu code in the intel driver is off by default and must be enabled via module option. And, while being at it, also suggest to load the kvmgt module. So I've dropped a config file with these lines ...

... into /etc/modprobe.d/. For some reason dracut didn't pick the changes up even after regenerating the initrd. Because of that I've blacklisted the intel driver (rd.driver.blacklist=i915 on the kernel command line) so the driver gets loaded later, after mounting the root filesystem, and modprobe actually sets the parameter.

With that in place you should have a /sys/class/mdev_bus directory with the intel gpu in there. You can create vgpu devices now. Check the mediated device documentation for details.

One final thing to take care of: Currently using gvt mlocks all guest memory. For that work the mlock limit (ulimit -l) must be high enough, otherwise the vgpu will not work correctly and you'll see a scrambled display. Limit can be configured in /etc/security/limits.conf.

Now lets use our new vgpu with qemu:

Details on the non-obvious qemu switches:

-nodefaults
Do not create default devices (such as vga and nic).
-M graphics=off
Hint for the firmware that the guest runs without a graphical display. This enables serial console support in seabios. We use this here because the vgpu has no firmware support (i.e. no vgabios), therefore nothing is visible on the display until the i915 kernel module loads.
-display gtk,gl=on
Use gtk display, enable opengl.
-device vfio-pci,sysfsdev=/sys/bus/mdev/devices/UUID,display=on
Add the vgpu to the guest, enable the display. Of course you have to replace UUID with your device.

libvirt support is still being worked on. Most bits are there, but some little details are missing. For example there is no way (yet) to tell libvirt the guest doesn't need an emulated vga device, so you'll end up with two spice windows, one for the emulated vga and one for the vgpu. Other than that things are working pretty straight forward. You need spice with opengl support enabled:

And the vgpu must be added of course:

Then you can start the domain. Use "virt-viewer --attach guest" to connect to the guest. Note that guest and virt-viewer must run on the same machine, sending the vgpu display to a remote machine does not yet work.